"In this document, all references to Blakebrook refer to Blakebrook Limited and its subsidiaries (Phixos Limited, Symbiotics Limited, and Real-Time Consultants Limited) and its trading divisions (Real Time Consultants, RT Consulting, Real time Executives)." The information included in the statement refers to the Financial Year 2022 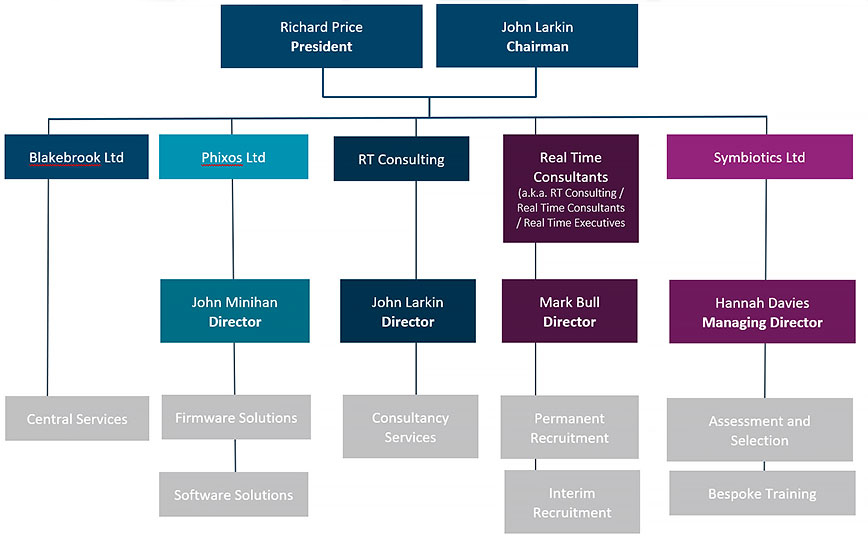 Blakebrook acknowledges its responsibilities in relation to tackling modern slavery and commits to complying with the provisions in the Modern Slavery Act 2015. Blakebrook understands that this requires an ongoing review of both its internal practices in relation to its labour force and, additionally, its supply chains.

Blakebrook does not enter into business with any other organisation, in the United Kingdom or abroad, which knowingly supports or is found to involve itself in slavery, servitude and forced or compulsory labour.
No labour provided to Blakebrook in the pursuance of the provision of its own services is obtained by means of slavery or human trafficking. Blakebrook strictly adheres to the minimum standards required in relation to its responsibilities under relevant employment legislation in the United Kingdom, and in many cases exceeds those minimums in relation to its employees.

In general, Blakebrook considers its exposure to slavery/human trafficking to be relatively limited. Nonetheless, it has taken steps to ensure that such practices do not take place in its business nor the business of any organisation that supplies goods and/or services to it.

During the reporting period covered by this statement, the COVID-19 pandemic had taken hold. For several months, the UK was placed into lockdown to stem the spread of COVID-19. This created several challenges for the Blakebrook, as it did for others across the nation.

Blakebrook concluded that the COVID-19 pandemic did not adjust the risk of modern slavery to a level above that which existed before the pandemic, which is as set out under ‘POTENTIAL EXPOSURE’ above. Its use of suppliers dropped significantly due to the fact that homeworking was swiftly implemented in March 2020 which meant that its premises, from which it usually conducted day to day business, were temporarily closed. Several of our workforce were placed on furlough as a result of the drop in demand for our services, meaning there were no additional temporary labour needs.

During the pandemic, the Group's employees still had access to the grievance procedure to raise any concerns that they may have had.

In line with emergency legislation passed by the Government, Group employees have been paid Statutory Sick Pay during periods of self-isolation where it has not been possible to agree a temporary period of homeworking. Blakebrook took the decision from the outset of the pandemic to ensure that all of the workforce who were required to self-isolate in accordance with public health guidelines continued to receive full pay during their absence.

Blakebrook's modern slavery risks were subject to the same monitoring procedures during the pandemic as at all other times.

Blakebrook carries out due diligence processes in relation to ensuring slavery and/or human trafficking does not take place in its organisation or supply chains, including conducting a review of the controls of its suppliers.

Blakebrook has not, to its knowledge, conducted any business with another organisation which has been found to have involved itself with modern slavery.

In accordance with section 54(4) of the Modern Slavery Act 2015, Blakebrook has taken the following steps to ensure that modern slavery is not taking place:

Blakebrook provides training to staff to effectively implement its stance on modern slavery during the induction process and through the modern slavery policy.

Blakebrook has a Slavery Compliance Officer, to whom all concerns regarding modern slavery should be addressed, and who will then undertake relevant action with regard to Blakebrook's obligations in this regard.

This statement is made in pursuance of Section 54(1) of the Modern Slavery Act 2015 and will be reviewed for each financial year.